Especially for International Flamingo Day, here are the FSG’s Top 15 fun and flamtastic flamingo -themed trivia for you to entertain, amuse and astound your friends with!

The oldest known flamingo was a greater flamingo that lived at the Adelaide Zoo and died aged 83 years old in 2014. A record of a wild bird recovered in 2014, ringed in 1962 (52 years old) maybe the oldest verified wild flamingo.

Although they have long legs and necks, flamingos are not closely related to other wading birds like storks and herons. In fact, their closest relatives are the grebes, pigeons and shorebirds (such as plovers).

Fact 3: Flamingos feed their chick in the same way as penguins do.

Male emperor penguins (Aptenodytes forsteri) produce a secretion from their crop that is fed to their newly-hatched chick. Flamingos also feed their young on a crop secretion, often called “crop milk”, but unlike the penguin that only produces this one meal and then switches to krill, flamingos produce “milk” until the chick is grown up and ready to become independent.

Fact 4: Some flamingos are missing toes.

Most flamingos have three forward facing toes that are webbed, and then a small back toe (called a hallux). This back toe is missing in the Andean and puna (James’s) flamingo and is a distinguishing feature of these two species. It is unknown what the hallux does and why it has been lost in these two species.

The original meaning of flamingo is debated, but it is thought to have originated from either the Portuguese or Spanish, flamengo, around 1560, which means “flame coloured”. Similarly, the Greek name for flamingos phoinikopteros means “red feathered” and the old Provençal (a French dialect) word for flamingo, flamenc, means “flame”.

Fact 6: Flamingos prefer to stand on one leg

Probably one of their most well known characteristics (aside of being pink), flamingos are not the only birds to stand on one leg but it’s certainly something people associate with them. A hotly debated topic, the reason for this behaviour was finally settled in 2017 when researchers measured the muscular activity associated with one-legged or two-legged standing. They found that a flamingo is perfectly balanced, with its leg “locked” in position when standing on one leg, and this is very energy efficient.

Biologically, flamingos are called “extremophiles”. Creatures that are specifically adapted to living in incredibly harsh, unforgiving conditions that other organisms would struggle to survive in. From high altitude wetlands, exposed to freezing temperatures, to baking tropical soda lakes, whose waters are pH10 and above (enough to strip human skin and flesh from bone), the flamingos live out their daily lives quite comfortably. Not as fragile as they might at first appear…

Flamingos are masterful engineers. They create a new nesting mound every year to keep their egg and chick safe. The flamingo’s mud mound is started from scratch, with the parent bird bringing small pellets of mud and sand together, gradually creating a mound that looks a bit like a small volcano. This mound sets hard in the sun, providing a solid foundation to hold the eggs and chick. It also draws up water from the damp soil it sits on. This water evaporates, cooling the chick in the process. The mound is also high enough to keep the egg and chick clear of sudden, seasonal flooding and tall enough to catch the prevailing wind. This again keeps the chick cool in the high temperatures and direct sunlight. Now that’s a clever feat of avian architecture!

Fact 9: Flamingos are the model of equality.

Flamingo society is based on equality between the male and female. Both sexes take part in the famous courtship dance. And both sexes decide on who they fancy and therefore both agree to form a breeding pair together. The female and the male flamingo in a nesting pair will both build the nest, both incubate the egg and both parent produce crop milk to feed the growing youngster. Now that really is a modern family.

It’s well known in human society that the boy or girl with the grooviest dance moves is the person who will turn the most heads. And the same is true for flamingos. Research published in 2016 showed that younger flamingos (those aged below 20) had the biggest range of dance moves and therefore were deemed the most attractive. Based on all of the different movements that make up the flamingo’s courtship, a bird can have up to 136 different ways of putting together all of these movements into different combinations of the display. The more complex the repertoire, the more attractive the flamingo.

The courtship display might be really obvious and clear for all to see. But how one flamingo chooses another and when they choose is still a mystery. We can see birds displaying as a group. And we then seen bonded pairs following each other around, and doing the same thing. But how has this choice been made? It’s still unknown…

Fact 12: Flamingos are choosier about their friends.

Regardless of the size of the flock they are in, flamingos are very particular about who they hang around with. Long-running research has documented, across all six species, specific choices being made by individual flamingos about who they want to spend time with and who they would rather avoid. Flamingo society is structured around specific, smaller groups of birds, that make up the wider flock overall, who are actively choosing one another’s company.

Fact 13: When you’re not pink enough, use makeup!

The greater flamingo is the palest species of flamingo and so to make a more vivid impression in the breeding season, it cosmetically enhances how bright its feathers are. Research published in 2011 showed that greater flamingos wipe more of their preen oil (used to keep feathers in good condition and waterproof) over their heads and necks during the breeding season. This preen oil is stained with the same carotenoid (pink pigments) as is found in their feathers, so by wiping more of it on their plumage, they make it brighter and therefore they look more desirable to a potential mate. Check out this “oil wiping” behaviour in the clip below.

Fact 14: Being a parent turns a flamingo white.

It’s hard work raising a youngster. And for flamingos this effort is obvious for all to see. By the end of the breeding season, mum and dad flamingos have expended so much energy on their chick that they have literally lost their pink colour. Flamingos moult at the end of breeding. So much time is spent feeding their offspring means parent birds haven’t had time to “top up” their own reserves of these pink carotenoid pigments and so the new feathers grow through white. The flamingo has to spend time foraging and consuming lots of carotenoids so that the next set of feathers can grow through pink.

Some scientist believe that flamingos have been around for many, many millions of years- perhaps since the late Cretaceous period (when the dinosaurs died out some 66 million years ago). Others suggest they are much more modern, evolving around 6.5 million years ago. Whilst some biologists show fossil records to date the evolution of the flamingo to approximately 30 million years ago. Whatever the date that the first flamingo waded through its prehistoric wetland home, this shows that for such a familiar animal, the flamingo still holds very many secrets.

... Thanks to Phoebe Vaughan, part of the animal care team at Slimbridge, for sending us this beautiful picture. https://t.co/3Nb85vc6SI 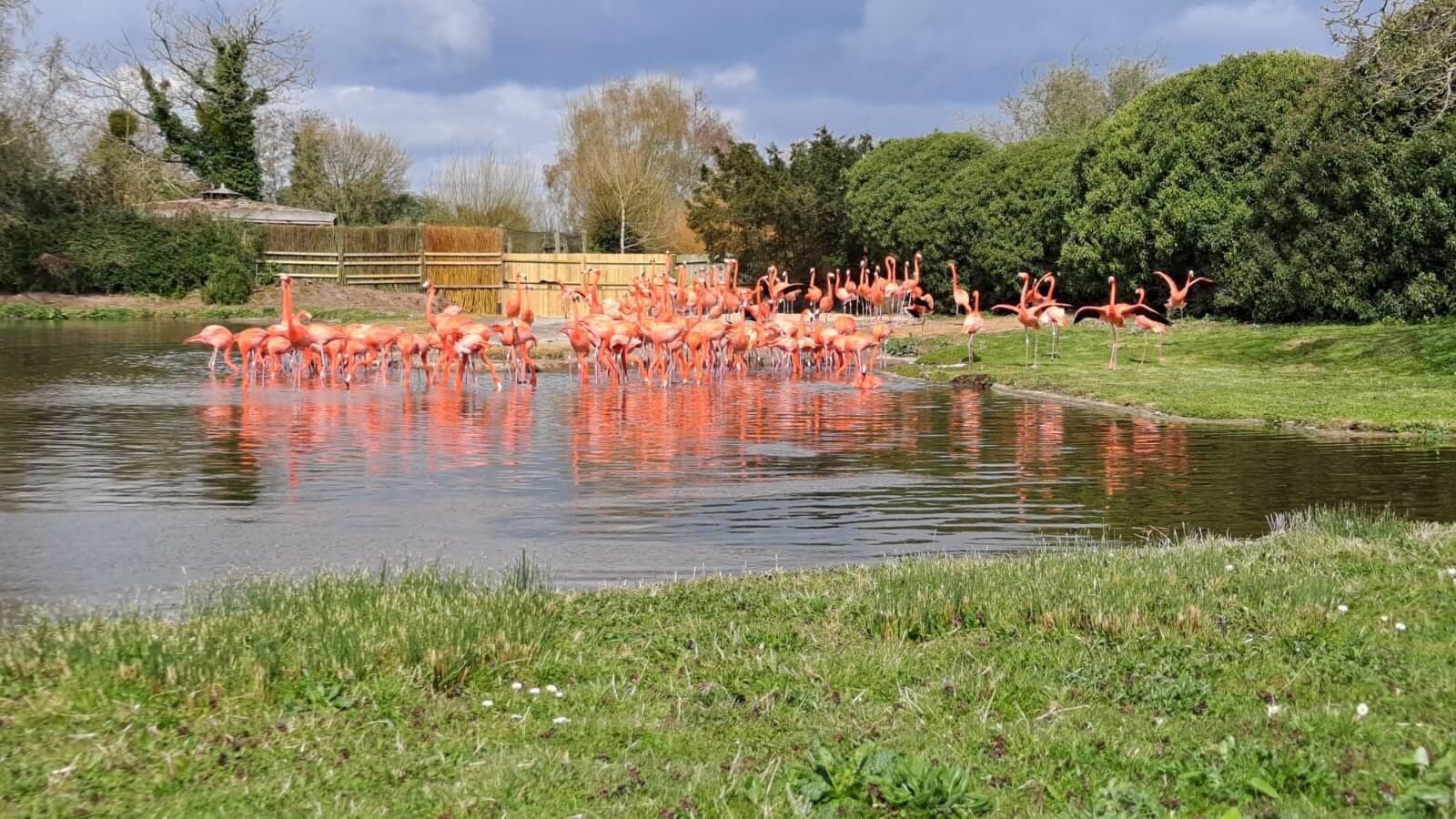 What a colourful flock! It's great to see the Caribbean flamingos out and about and being enjoyed by visitors as our home at WWT Slimbridge Wetland Centre (and all other WWT centres) reopens following the lockdown...
h J R
@FlamingoSpecGrp

Zoos across the UK are reopening their outdoor areas today as the country reopens cautiously after lockdown. These beautiful greater flamingos at Marwell Wildlife are no doubt excited to welcome back visitors :-) Keep safe and enjoy the outdoors responsibly, folks. https://t.co/fjxNBFi44b 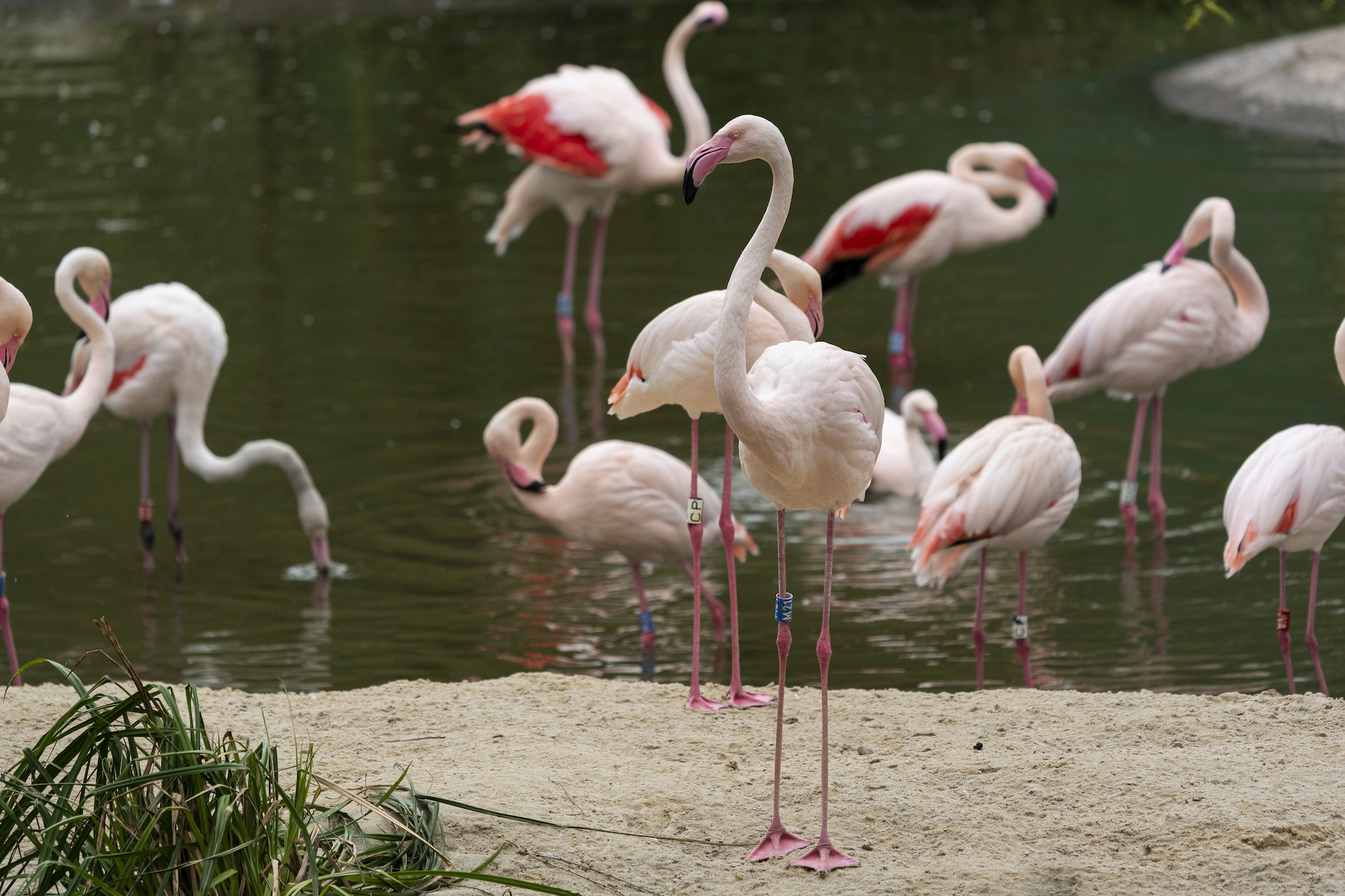 Want to learn more about why each of the six flamingo species are unique? Join in and celebrate these amazing birds on #internationalflamingoday. International Flamingo Day, 26th April. https://t.co/4yrvm0CKbc 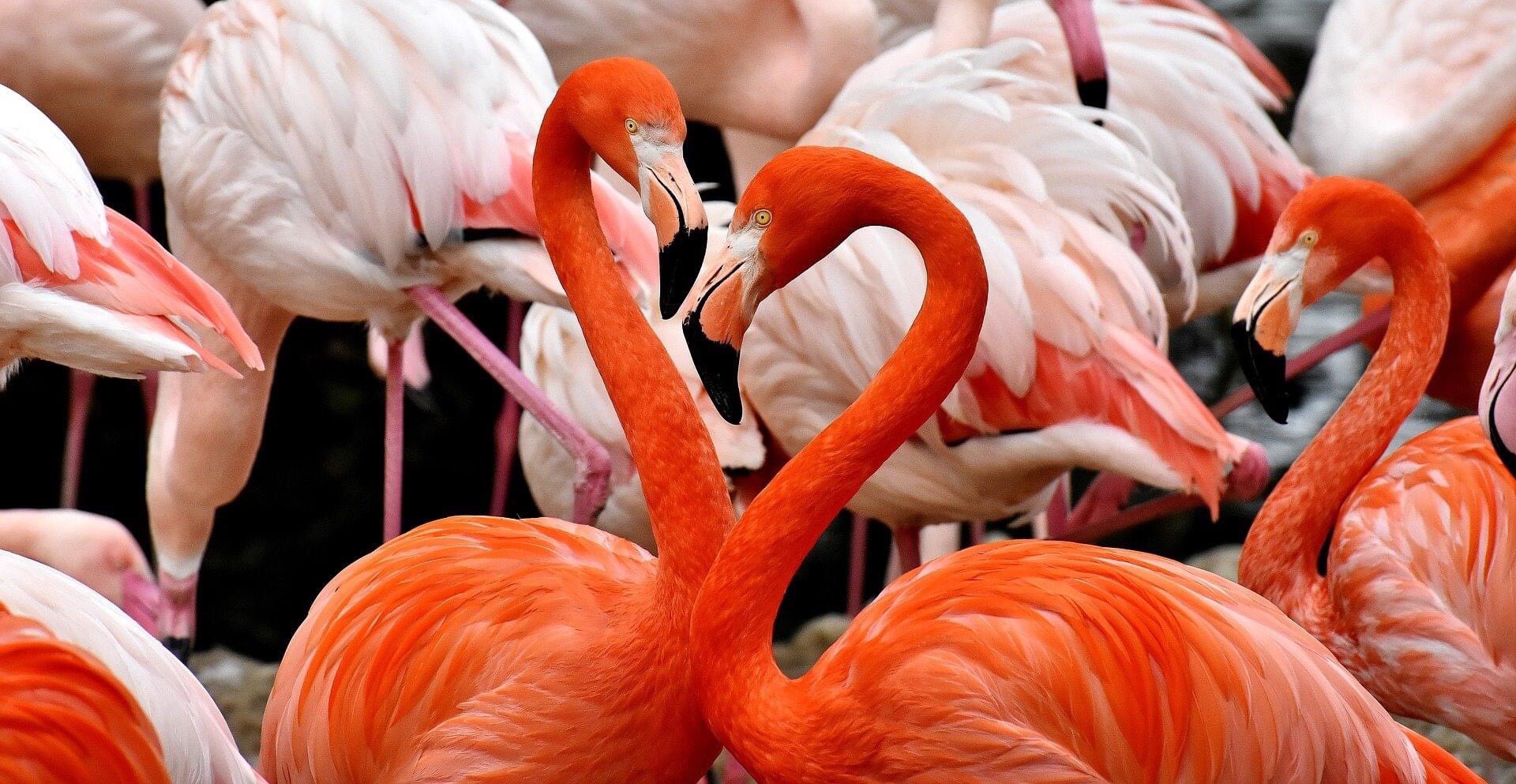